The Friends of the Scottsdale Public Library is proud to announce that former Board President Joan Fudala is receiving one of this year’s Governor’s Heritage Honor Preservation Awards, to be awarded virtually in June.

Fudala is also a member of the Scottsdale History Hall of Fame, and has authored numerous books on the history of Scottsdale. She served as President of the Friends’ Board from 2003 to 2004, and received a Spirit of Literacy Award from the Friends in 2014.

Recently, Fudala was a pivotal member of the Scottsdale Heritage Connection (SHC) campaign committee from 2017 to 2019. This group completed a $500,000 capital campaign to build the SHC space in Civic Center Library that permanently houses the written and visual history of Scottsdale for research and documentation purposes.

You can learn more about the Governor’s Heritage Honor Preservation Awards and see a list of current and former winners at the Arizona Preservation Foundation website.

Two former Presidents of the Friends of the Scottsdale Public Library recently received Historic Preservation Recognition Awards from the Grand Canyon Chapter of the Daughters of the American Revolution on October 5.

Paul Messinger and Douglas Sydnor received the awards due to their efforts preserving the history of Scottsdale.

In addition to their time serving on the Friends Board, both Messinger and Sydnor were committee members who helped raise funds for the Scottsdale Heritage Connection, the Friends’ major fundraising effort from 2017-19. They were also Gold and Silver donors, respectively, toward the new space.

The SHC will officially open to the public on Saturday, October 19 within Civic Center Library. It will preserve the written and oral history of Scottsdale, offering research opportunities and historic lectures.

“Paul Messinger is a walking encyclopedia on everything Scottsdale and very much deserves to be recognized by the Daughters of the American Revolution for his contributions to preserving history,” wrote Marshall Trimble, Arizona’s Official State Historian, in his letter of recommendation.

The Friends congratulates Messinger and Sydnor on their recent honor, and thanks them for helping preserve the history of Scottsdale.

The Scottsdale Public Library has announced its next free salon series events celebrating the history of sports in Scottsdale on Thursday, September 12 at 6pm.

Back by popular demand, additional salon series events will soon be announced to cover numerous historical topics. They are led by Fudala and Doug Sydnor, former members of the Friends of the Scottsdale Public Library Board, in conjunction with the Scottsdale Heritage Connection (SHC).

The salon series originally began in February 2018, with continuations in fall 2018 and spring 2019. While they have traditionally rotated throughout Scottsdale Library branches, the hope is that they will soon be housed within the SHC space, scheduled to open to the public this fall.

After over two years of fundraising, the Scottsdale Heritage Connection held its ribbon cutting ceremony with a private breakfast for donors on Tuesday, June 25 at Civic Center Library. 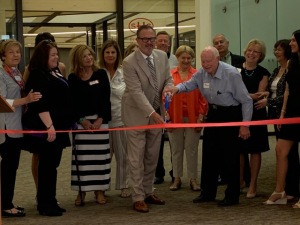 Mayor Jim Lane was present to cut the ribbon, as were valued members of the Friends and the SHC fundraising committee. Attendees were treated to a tour of the space and breakfast items catered by Creations in Cuisine Catering.

The space is in the former home of Scottsdale Public Art next to the Knowasis Teen Center. It will be open to the public later this summer, as shelving still needs to be installed to house the historical documents. Once opened, the SHC will showcase over 10,000 documents celebrating the history of Scottsdale.

For those unable to attend, here is a brief Project Narrative reviewed during the opening.

Stay tuned for more details about free historical programming in the space beginning this fall. It’s also not too late to donate if you want to help us hit our goal of $500,000. The next stage of the project will be installing kiosks at the other Scottsdale Library branches to showcase the collection. 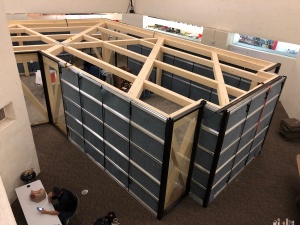 The Independent article interviewed Library staff as well as the Scottsdale Charros, one of the donors to the SHC project. It also highlighted additional fundraising efforts by the Friends, including the Books2Go micro libraries.

The Progress article focused on the May City Council meeting where the Scottsdale Library approved of naming rights for the interior space for the Messinger Family.

Both articles included construction images of the SHC space in Civic Center Library.

If the links to the articles no longer work, you can also access screenshots from the Independent and Progress websites.

Member of the Alliance of Arizona Nonprofits